Hit enter to search or ESC to close
Uncategorized

Is it possible to love too much?

By Janelle McLaughlin August 26, 2015 No Comments

Home » Is it possible to love too much? 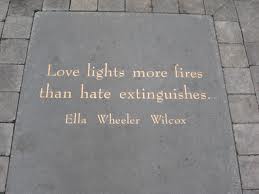 I just finished the book, When Mockingbirds Sing, by Billy Coffey.  In it, the father of the main character, a psychologist, often puts his work before his wife and young daughter.  They excuse this by saying that it’s because he, “loves too much”.  As I was lying in bed this morning, having woken an hour and a half before my alarm was set to go off, I thought about this phrase.  Is it really possible to love too much?

Over the years I have been in education, there have been many children to make it into my heart.  There have been some that I’ve wanted to bring home with me to show them what a loving home was really like.  Some even weigh on me five years later, as is the case with a seventh grade boy that I had as a student when he was in second grade.  I know he had to go to an alternative school last year.  I will see him around the community and he just looks unhappy, and I want to go over and pull him into a hug.  I can’t, though, because he has had a wall of protection built around him for a very long time.  I have bought shoes, clothes, and baked birthday cakes for students-in-need over the years. I love big.  That’s just an “in-general” kind of comment, but boy does it spill over into a classroom.  Is it hard to watch these children going home to an unhealthy home each night?  Yes.  Is it a little awkward when a sixth-grade boy still wants to hug me when he sees me in the hall?  Yes.  Do I do it anyway? Yes – with a side-one-arm-around-the-shoulder modification. 🙂  Would I, could I love them less?  No, I couldn’t.

So, can a person love too much?  Maybe someone loving an abusive partner, or an addict loving their next high, or a sports-enthusiast loving the game so much that they over extend their wallets…but can you love a child too much? No way.