What does it mean to be a Lead Learner?

Home » What does it mean to be a Lead Learner? 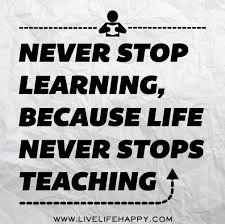 I remember several years ago when I was in my first year as a curriculum director and an active Twitter lurker. (Some might argue that label is an oxymoron, but it’s not.  I’ve sense moved out of the lurkosphere, but learned many valuable lessons while living there.) I was explaining to a group of teachers that I could jump on Twitter for fifteen minutes and find links to relevant articles for my own professional learning.  Here’s the part that still gets me today.  One of those teachers dryly replied, “You expect us to do this on our own time?”

The term, Lead Learner, is one of those en vogue phrases in education.  You will hear, both, administrators and teachers use it to describe themselves.  I’ve heard pleas to refer to students as “learners” now, as well.  So what does it mean to be a Lead Learner?

One can’t just declare themselves a Lead Learner.  It is something modeled, shown, and only earned through action. There are so many ways to show you are learning.  If you are a district-level leader, are you learning before and with your building-level leaders?  Are you present in the school buildings and at community events?  Do you have a social media presence? (Even if you are only lurking on Twitter to find great blog posts…it’s perfectly acceptable).  Obviously the teacher I mentioned above did not relish the idea of finding her pd on Twitter.  That’s fine, but my wondering was “Where does she find it?”  Her attitude suggested that she wasn’t going to spend any time outside of her contracted day to search for topics meaningful and relevant to her as a teacher.  Not to mention, those kinds of comments are what give teachers a bad name.  The majority of educators put in exorbitant hours, well beyond their contracted hours/days.

Principal as a Lead Learner:  My nine-year-old son has a new principal this year.  Out of nowhere yesterday, my son says, “Mr. R is awesome!  He hangs out with us at lunch and laughs with kids in the hallway.  He plays jokes on kids.  He’s just great.  Our old principal was mean and boring.  He just wanted kids to respect him.”  My response was, “Who do you respect more?  Mr. M or Mr. R?”  “Mr. R, of course! He’s nice!”  In my opinion, Mr. R is demonstrating his role as Lead Learner of his elementary building.  He is learning his new students’ names and personalities by interacting with them on their turf.  In a week and a half, he has already won the respect of one third grader, and I’m sure it goes much further than my son.  Mr. R is showing his teachers that he values authentic relationships.  He’s learning and teaching by example.

District Administrator as a Lead Learner: I am friends with a Director of Technology and Media Services of a large school system.  Before going on a family vacation he asked me what professional book I’d recommend.  He wanted to get it on audio to listen to during the night time hours of driving while his family was sleeping.  He could have easily opted to listen to music or sports but wanted to capitalize on his time while not taking away from his family time.  He also attends regional and national conferences, taking his team when possible, to serve the stakeholders of his district.

Teacher as a Lead Learner: I have so many examples of wonderful teachers that I’ve taught with, worked beside, and trained throughout the years.  A few snapshots from my recent role as a consultant come from a school district in Waukegan, IL.  I was honored to spend three days working with some of their middle/high school teachers as they learned about Chromebooks, Digital Citizenship, and GSuite.  There were a few people who I connected with more deeply, and I’m going to talk about two: Sarah and Lillian.  Sarah is a health teacher who loves her job.  She is probably in her forties and spends her own time developing quality units and lessons in order to engage and teach her students.  Her enthusiasm and hard work made my “job” so much fun.  She embraced the learning and you could see her desire for constant improvement in her attitude.  She showed me a letter a former student gave her, so I know just how blessed they are to have her as their lead learner.  Lillian was close to sixty years old (though you would never know it!), retired from the Army, and taught JROTC at the high school level.  The entire group of JROTC teachers was a blast, but Lillian and I formed a bit of a fast friendship.  I loved to see the look of pride on her face as she set up classes in Google Classroom.  Here is a lady who truly is a lifelong learner (just look at her career history!), and is still excited to learn with and for her students each year.

Students as Lead Learners: Typically when you hear the Lead Learner term, it’s referring to adults, but students can, are, and should be Lead Learners, as well.  If a teacher is striving for student-led instruction, then the students are the lead learners.  This should be the norm, not the exception, and I look forward to the day that it is.

Everyone has the ability and responsibility to be their own Lead Learner.  If they happen to be leading someone else’s learning in the process, then all the better.  Myself? I love social media because it connects me to so many avenues of great learning.  This week I will talk to three different contacts made via LinkedIn.  I know that I will learn from those conversations, and be energized in the process.  Well, I’m off to post this to Twitter and LinkedIn, and then look for other people’s posts so that I can learn from them.  Being a Lead Learner is a reciprocal position.